A Fantastic Journey with White Walker by Johnnie Walker

Inspired by Game of Thrones, this limited edition whisky will be coveted by every fan of the series. Find it now at duty free stores.

Game of Thrones, the world’s most successful TV series to date, is coming to an end in April 2019, and the renowned cult brands Johnnie Walker and HBO have joined forces to launch a new whisky line: White Walker by Johnnie Walker. This limited edition, both exclusive and captivating, is full of surprises, having been developed for classic Scotch and Game of Thrones lovers alike. For fans of both, this whisky is a total must-have for the Season. Do not miss the opportunity to get your hands on White Walker limited edition on your next visit to the duty free store on your journey.

The creation of this unique whisky lies in the hands of an expert team of blenders at Johnnie Walker, lead by Master George Harper. As inspiration, the team chose the “Night King”, the leader of the feared White Walkers, who are the enemies to be defeated in the upcoming Final Battle. These mysterious creatures inspire a terror that sends chills down your spine.

Master Harper utilised the “Northern” concept as the basis for his creation, which is why he chose for his blend the single malts from two of the northernmost distilleries in Scotland: Clynelish and Cardhu.

“Whiskies from Clynelish have endured long, Scottish winters, not dissimilar to the long periods endured by the Night’s Watch who have ventured north of the wall - so it was the perfect place to start when creating this unique whisky,” explained Harper last October, at the official release of White Walker by Johnnie Walker. White Walker is produced through a chill filtering process in which the whisky is cooled to 1.5 degrees Celsius before being left to mature in wooden casks. The chill filtering process creates the frozen and electrifying heart of the whisky. This is an unusual distillation process, used to create beverages to be enjoyed at low temperatures.

As a result, White Walker is a complex whisky of great aroma and strong presence. The seductive notes of caramelised sugar and vanilla are instantly captured by the nose and on the tongue. The duration is medium to long, with a subtle spiciness that marries together fruity red berry and apple notes. Experienced whisky tasters have further highlighted this special combination which also includes winter fruits, mint and ginger tones. These unusual characteristics make White Walker a very attractive whisky even to those who don’t follow Game of Thrones!

The design of this exclusive edition was inspired by the freezing cold of the eternal ice, for which a spectrum of bright white and electric blue hues was chosen. Even the mythical Striding Man logo, (as illustrated by Tom Browne), which has featured on every Johnnie Walker bottle since 1908, has had to be adapted. This time, his classic regalia has been changed to the Night King’s suit of armour, and his walking stick is now an ice blade. Naturally, his top hat remains impeccably in place.

The bottle is engraved with temperature-sensitive ink technology which activates when stored in the freezer, acquiring a new appearance. This technology allows control of the best time to consume the beverage, as well as revealing different secret graphic messages hidden on the bottle itself. No special Game of Thrones experience is complete without an array of surprises intended to delight fans.

The last season of Game of Thrones will air across the globe in April 2019. There are six episodes, with fans across the world already organising Game of Thrones parties to watch the series finale as each episode comes out thus avoiding spoilers! Such parties have become an internationally growing trend in the last few years, particularly because of the many plot twists in series like Game of Thrones. There is nothing better than a bottle of White Walker by Johnnie Walker for Game of Thrones fans to celebrate their favourite characters in their final battle. Visit our duty free stores on your next trip and let the cold capture you!

Army of the Dead

This drink is named in honour of the army that threatens to bring winter to Westeros. Add 1.25 oz White Walker by Johnnie Walker Scotch Whisky and 5 oz coconut soda in a highball glass. Add ice to the glass and stir for 2 seconds. Garnish with a lemon wheel and mint sprig. Another recommended option is “Hold the Door”, referencing one of the most striking and revealing moments from Season 5. Add 1.25 oz White Walker by Johnnie Walker Scotch Whisky and 5 oz berry soda in a highball glass. Add ice to the glass and stir for 2 seconds. Garnish with blackberries and raspberries. Send a raven – Scotch has officially arrived at duty free. White Walker by Johnnie Walker, the limited-edition Scotch whisky inspired by the Game of Thrones. 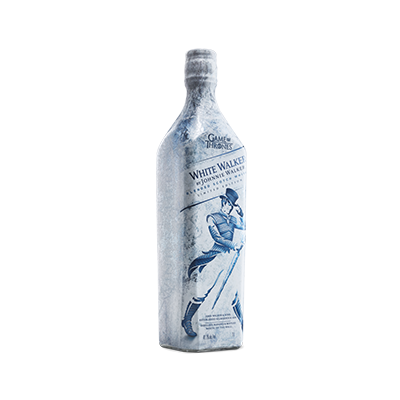